This is the biography of a young local guy who dared to dream in a small country called Lebanon. The son of Roger and Randa Frem, born in 1982, ENG. David Frem CEO OF FREM INDUSTRY Established in 2009

ENG. David Frem was able at the age of 30 to score many remarkable accomplishments in the world of automotive design and manufacturing. His strong will overcame all obstacles.
Struggled for years to reach his dream, he became an idol for the Lebanese youth.

"Nothing splendid has ever been achieved except by those who dared to believe that something inside them was superior to circumstances. He strived for his achievement, the achievement that was at first and at a time a dream. He never stopped; every obstacle was simply a course to develop his accomplishment muscle. He gave himself room to fail and fought like hell to attain. He planned purposefully, prepared prayerfully, proceeded positively and pursued persistently.

David Roger Frem, never lost sight of his achievement and shall reach greater and greater stages of success!'

Over the years, the Middle East region witnessed revolutions in the world of automotive design and manufacturing as a result the introduction was dedicated to David Frem, Lebanese citizen who changed his stars by his accomplishments that are simply Lebanese.

His story starts at the age of 17, when the young David firstly realized his gift of drawing cars.... His enthusiasm towards vehicles, their shapes, curves and performance grew with the years. He was capable to design a 2-dimension car using programs, which allowed him to propose the execution to his first vehicle model as his university senior project. Professors and board declined David's proposal five times in a row, but he was persistent enough to convince them and that's when his project started at mid-year 2005. 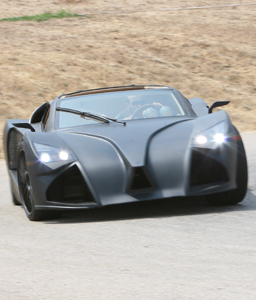 A1/3-scale model was manually crafted and named the Blue Shark car. It took seven months to be completed...Blown away by this accomplishment, the university graduated David as a distinguished student however David was seeking an even more tough challenge, mastering the 3-D designing programs, he decided to execute an actual car, handmade, 100% Lebanese. He longed to accomplish a great and noble task and dreamt about it day and night.

Early year 2006, able to get his first sponsor, David commenced his journey in realizing his vision. It took him 3 years to reach his goal, facing many obstacles since Lebanon was going through rough period, unstable political situation, assassinations and war. But none of the above was capable of stopping David from moving forward.

2008, Frem f1 car was revealed to public... it was garnered for over a year with media coverage, whether it is printed media, broadcasted; national and international. His campaign adopted one theme: '' It is only One's dream can built a country''. All Lebanese youth were looking up to David... But still David was not feeling fulfilled.

As part of our expantion plan, FREM Industry is looking to partner with worldwide agents.